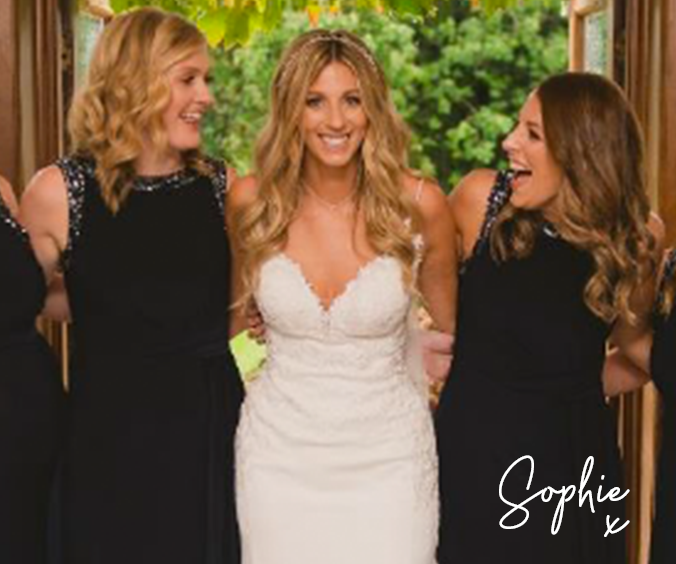 How did you first hear about Sophie Parker Dental?

When I finally decided I was going to do something about my teeth I did a lot of research online for Invisalign providers near me in Cheshire.

I quickly realised there were so many people/businesses offering Invisalign or similar – ultimately I wanted a credible specialist and someone I felt comfortable with – not just the cheap/quick fix option! Sophie really stood out to me for that reason.

I also wanted a practice which was quite local, especially if I was going to be making many visits. Sophie is based in the middle of Hale village which was absolutely perfect for me!

What service/treatment did you have?

Invisalign, composite bonding and whitening. I chose Invisalign over other alternatives as I felt it was the leading brand in its field, therefore the most reliable and credible.

What made you decide to have the treatment?

I thought as I was now in my thirties it was too late to do anything about them – how wrong I was!

I was ashamed to admit I had actually neglected my teeth for so many years – I was embarrassed of how they looked and had never been confident to show off my teeth in public and in photos.

Growing up you saw so many people with the ‘train tracks’ fixed braces – which was really the only option back then!

I started to hear a lot about Invisalign – a clear brace which you can hardly see – sounded perfect! There seemed to be a lot of other versions of Invisalign around – but I felt this was the most trusted and credible.

Why did you choose Sophie Parker Dental?

The day I met Sophie I was so nervous! I’d always had a fear of going to the dentist – from a younger age and having to have a lot of dental work done as a child.

I remember my first visit consultation – I actually cried!! I was initially so embarrassed about my teeth at the time! But Sophie had such a calming and reassuring manner, which made me feel so comfortable and confident that I could actually get the smile I always wanted!

At the time of my first appointment with Sophie it was only 6 months before my wedding! I’d left it so late! With her being an Invisalign specialist, she was able to scan my teeth there and then and

show me exactly how my teeth would look by the date of my wedding – I couldn’t believe in such a short space of time they could look that good!

However, Sophie did explain very clearly that the results are totally dependent on how committed you are to wearing the aligners! They recommend 22 hours a day in order to keep on track with your timeline. So it really was up to you how quickly your process takes and how often you wear your aligners.

How long did your service/treatment take to complete?

I’d say my transformation was done in two stages. Initially I had less than six months until my wedding day. I really was over the moon with the results that short period of time – in total though I’d say it was around 9 months – which took into account of my going away on holidays and honeymoon in that time – so it could have been even quicker than this.

How did you cope with Invisalign on a day to day basis?

I wanted results as quickly as possible! So I made sure I was really strict with myself and really committed to wearing the aligners.

I’d carry a toothbrush everywhere! Which isn’t always necessary – but I just wanted to do everything I could to hurry the process along!

So after every meal and particularly drinks like coffee, I’d go and brush my teeth or rinse with some mouthwash and then pop the aligners straight back in.

The first few weeks you get a bit obsessed with comparing your teeth in the mirrors to your ‘before’ pictures to try and notice any slight changes.

You don’t really notice many changes initially – as it’s so very subtle – so you just have to trust in the process!!

I didn’t really have any pain at all – even when I would change my aligners each week. The first day of each new aligner might be a bit tight and a little achey, but would then be totally fine! Maybe that’s because I wore them constantly – but they really were pretty pain free!!

How did you feel a few months in?

It’s amazing how quickly you get into a habit of wearing them, and if I was out on a night out I’d either brush my teeth after dinner and pop them back in – and just be careful which what I drank – either gin or prosecco. Or I’d just keep them out for the evening, but make sure I had them back in before I went to sleep!

If I was out and about a lot, I’d just carry a little pack with me, which had a toothbrush, mini toothpaste, mini mouthwash and dental floss! That was my go-to! Never relied on dental floss so much!!

It was probably a few months before I started to notice the movements – especially when Sophie started doing the reduction work between my teeth to allow them to move more.

As your journey wasn’t 100% complete for your wedding, how did you adjust your treatment plan?

Four weeks before the wedding I was going on my hen do, so Sophie actually took off my attachments (the bumps on your teeth which speeds up the movement) which meant when I returned I could have 2 full weeks of whitening before the wedding.

I actually found the whitening the worst part! I just had to persevere with it though but my teeth were just so sensitive! I’d add the solution into my aligners and sleep in them overnight, which was fine – it would be the day time where they were very sensitive – but they really did look so lovely and white by the wedding day so you just need to stick with it!

How did you feel on your wedding day?

On our wedding day itself I had never felt so amazing! It really was the happiest day of my life! I never stopped smiling all day and I know I wouldn’t have had the confidence to (especially in all the photos!) if I hadn’t had Invisalign!

Even though my smile transformation wasn’t even fully completed by the day – I felt so confident smiling away and looking back at the photos now – I can’t thank Sophie enough!

What was the last few months of your treatment like?

After the wedding I went back to wearing my aligners for a few more months – where I was a little more relaxed about wearing them. When I got back from my honeymoon in the new year, I did another week of whitening – before Sophie completed the process with some composite bonding and shaping. Which I hadn’t really heard much about – but WOW!

I had wear on my teeth, so the bonding just gave a fuller look – it totally transformed my smile and finished it off perfectly!!

When I walked back into work after my last appointment my friends and colleagues could not believe the results either! I literally couldn’t stop smiling!

How did you feel at the end of the treatment/service?

The confidence I now feel has truly exceeded all of my expectations. From socialising with my friends, smiling away in photos, to my business life too, in meetings and presentations, I’m even more confident now.

I just can’t thank Sophie enough, I really felt like she went above and beyond to give me the look I always wanted.

I’ve had so many compliments since my transformation – just makes me smile more every time! I just wish I had done it sooner!!